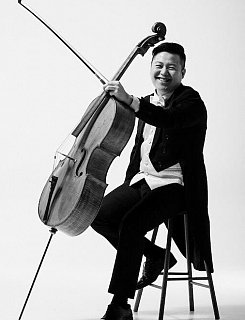 James Yoo was born in 1988 in South Korea and he began playing cello at the age of 7. He studied at the Sydney Conservatorium, the Musikhochschule in Cologne, and The University of Waikato. Former teachers include Maria Kliegel, James Tennant, Susan Blake and Thomas Tsai.

James regularly performs throughout New Zealand, Australia and Asia. Since the age of 16, he has been frequently invited to perform on Fine Music 102.5FM and the Australian Broadcasting Corporation. He has also performed as a soloist with numerous orchestras and ensembles, including SBS Television and Radio Youth orchestra, Kuring-Gai Philharmonic Orchestra, North Sydney Youth Symphony, Camerata Ensemble and The University of Waikato Orchestra.

James was a member of the Auckland Philharmonia Orchestra for 4 years.

He currently teaches cello and chamber music at the University of Auckland.

As an educator, James is well known in the Auckland musical community, both as a cello and chamber music teacher. He is particularly interested in analysing and giving lecture recitals on technical aspects of cello playing, including Etudes and Caprices by David Popper and Carlo Alfredo Piatti.