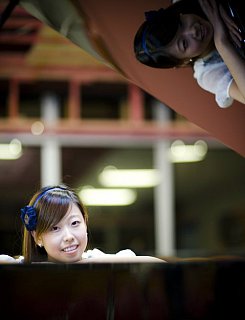 Kee-Hee began her piano studies at the age of eight and prior to her studies at the University of Auckland was under the guidance of Tatiana Lanchtchikova at the Epsom Music School. In 2015, she completed her masters degree in piano performance under the tutelage of Stephen De Pledge. During her time in university, Kee Hee was placed first in the Te Awamutu competition for the Jan Yarndley Mozart prize in 2012 and after placing second in the Hamilton recital competition she competed in the semifinals of the National Young Performer Awards in Invercargill. In the year 2013 she received the Margaret Doone Memorial Piano Sonata Scholarship as the winner of IRMT’s Sonata Competition. She was also one of 16 contestants selected to compete in the Wallace National Piano Competition in July 2015.

From a young age Kee-Hee developed a passion for chamber music enhancing to the semifinals and district finals of the NZCT Chamber Music Contest. Her debut concerto performance was with the Aotea Youth Symphony Orchestra in 2006 followed by another performance in 2008 performing Mozart piano concerto in F Major K459.