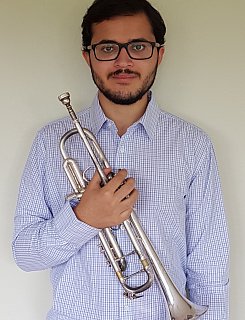 Jake Krishnamurti is currently completing his Bachelor of Music at the University of Auckland. He first started playing the trumpet at the age of 4 and now regularly performs with many ensembles throughout Auckland. He also began playing trombone in high school and has earned DipABRSM Music Performance Diplomas on both trumpet and trombone.

His professional experience includes playing in performances of Phantom of the Opera, Billy Elliot the Musical and at the Pop-up Globe. Jake is also a keen jazz musician and has performed at the Tauranga Jazz Festival with groups such as ALCHEMY and the Queen City Big Band. Musical highlights include playing a duet with Josh Groban, performing with the Auckland Philharmonia Orchestra alongside Sol3 Mio at Christmas in the Vines, as well as playing at the opening ceremony of the 2017 World Masters Games.