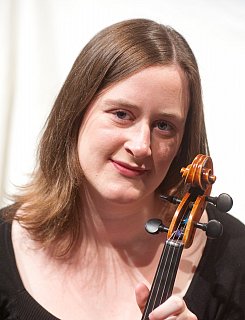 Originally from Dunedin, Helen Bevin gained a Masters of Music with Distinction from Guildhall School of Music & Drama in 2011, studying under Rachel Roberts. She then spent two years in London freelancing with such orchestras as the London Philharmonic Orchestra, Philharmonia Orchestra and Britten Sinfonia, touring extensively throughout Europe and China. Helen also lived in Finland after being appointed Solo Viola with the Lahti Symphony Orchestra.

Closer to home Helen has played with the New Zealand Symphony Orchestra, Orchestra Wellington and Southern Sinfonia. While studying with Gillian Ansell at the New Zealand School of Music she was Principal Viola with the NZSO National Youth Orchestra, performed concertos with the NZSM University and Dunedin Youth Orchestras, and won a number of awards including the Pettman/ROSL Arts International Scholarship. She has played solo recitals throughout New Zealand and the UK and has attended IMS Prussia Cove, Thy Masterclass and Moritzburg Festival Academy.