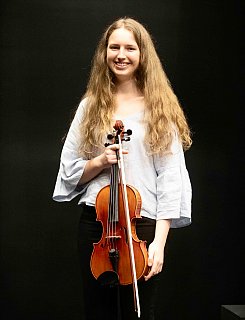 Originally from Ōtautahi Christchurch, Jessie Anderson is in her final semester of a BMus/BA conjoint degree at the University of Auckland. She studied viola under Stephen Larsen, in addition to her politics and sociology majors. Since moving to Auckland, Jessie has been active in the local music scene, particularly finding success with her string quartet Viereinigkeit. The quartet is an APO Aspiring Musician Ensemble, and in 2020, won the Pettman/ROSL Arts Scholarship. They will tour the UK later this year, performing in the Edinburgh Fringe Festival and the British Isles Music Festival.

Jessie has been a member of the NZSO National Youth Orchestra since 2017 and was the principal viola of the Auckland Youth Orchestra from 2019 - to 2021. She has attended the Adam Chamber Music Summer School with the NZSQ on a number of occasions. Jessie also holds an ATCL on piano and enjoys teaching both privately and for Lewis Eady Music School.