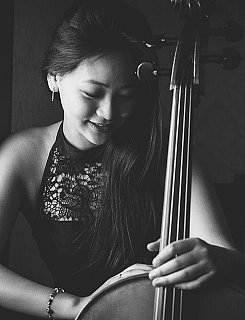 Born in Indonesia and raised in New Zealand, Jesbery Hartono-Hall holds a Master of Music with First Class Honours from the University of Auckland, New Zealand. She has been awarded scholarships and funding such as the Anne Bellam and the Wallace Foundation to further her studies in Europe.

Jesbery has played for and worked with many renowned artists such as cellists Daniel Müller-Schott, Torleif Thedéen, Alexander Gebert, Clemens Krieger (Dresdner Philharmonie), Dinar Enikeev (Robert Schumann Philharmonie), Ramón Jaffé, Mario di Secondi and Elisabeth Kufferath of the Tetzlaff String Quartet, amongst many others in Germany, America and New Zealand.

She has played at prestigious venues around Europe such as the Berlin Konzerthaus and Predjama Castle, amongst many others. Jesbery has also played in film soundtracks and other music videos in New Zealand. A founding member of the prize-winning Akato Piano Trio, the group has also been succesful in New Zealand and Europe.

Jesbery is an active orchestral musician who performs regularly with the Auckland Philharmonia Orchestra, Christchurch Symphony Orchestra and the Royal New Zealand Ballet, and has also worked with the Auckland Chamber Orchestra, Bach Musica NZ, Orchestra Wellington and Trust Waikato Symphony Orchestra. She is passionate about teaching students of all ages and works at the Epsom Music School, Remuera Music School and Albany School of Music.