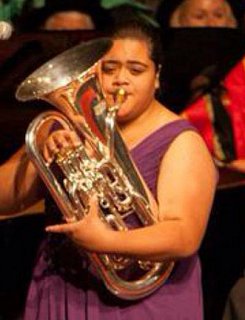 Linda Filimoehala won several competitions in Auckland. At the age of 19 she won her first open age championship in the ABA fast melody solo competition, In 2013 she became the first pacific islander and the first euphonium player to be a finalist in the Auckland University Graduation Gala Concerto Competition and to this day she is still the only Pacific Islander and Euphonium player to have made it in the final. She recieved a Gold in the New Zealand Concert Band Association (NZCBA) solo competition and won the open age category in 2017 and 2018. Linda has participated in many Brass Bands, such as the Auckland City Youth and Senior Band, The Smiths Locksmiths Manukau City Brass Band, The Royal Air Force Brass Band and is currently playing principal Euphonium for the Trusts Waitakere Brass Band, The Royal Regiment of New Zealand Artillery Brass, The Central Auckland Brass Band and hails from a family of talented Tongan musicians. Linda’s greatest achievement was opening a music academy in 2015 for underprivileged kids who couldn’t afford lessons. Working together with her family they were able to provide free education as well as free musical instruments. Linda is a passionate musician and loves what she does.