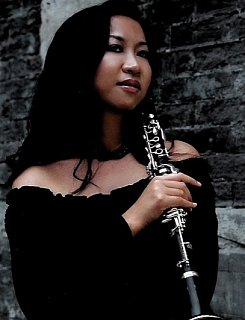 Elsa is an active freelance musician and experienced teacher since arriving New Zealand in 2005. She performs with Bach Musica and Auckland Chamber Orchestra in Auckland. As principal clarinet, Elsa regularly performs with the Festival Opera and Hawkes Bay Orchestra at Napier, she also had a great fun playing principal with Orchestra Wellington for their recording project before the Covid Lock Down. In addition, Elsa really enjoys all the performances with NBR Opera Tour, and several chamber music works and Musicals items at the Auckland Festival.

Before arriving New Zealand, Elsa was appointed as Assistant Principal and Bass Clarinet at The China Philharmonic Orchestra (CPO) through PRC China’s Foreign Expert Bureau. With CPO Elsa had opportunities to perform with international artists such as Itzhak Perlman, Placido Domingo, Vladimir Ashkenazy, Elaine Paige and Lang Lang etc. She was also a featured soloist with CPO performing Copland Clarinet Concerto and broadcasted on National TV. With her job, Elsa performed extensively in Asia, Europe, North America and Latin America. Cities and countries she had toured through are Tokyo, Seoul, Taiwan, London, Paris, Vienna, Berlin, Warsaw, Italy, Slovenia, Croatia, Toronto, major cities in America and Puerto Rico. She was also invited as guest clarinet to perform with Singapore Symphony.

Elsa is originally from Hong Kong. She gained her Master of Music degree and DMA candidacy at the College-Conservatory of Music (CCM) at University of Cincinnati with years of fellowship grants from Hong Kong Jockey Club Music and Dance Scholarship as well as CCM Scholarship. At school she won CCM Concerto Competition and was commissioned a concerto written by Professor Emeritus Dr. Allen Sapp. This Concerto for Clarinets was specially written for Elsa featuring her versatility on Eb Soprano, A and Bass Clarinets all in in work. While still a student, Elsa won International Clarinet Association Recording Project Competition with her Clarinet Quartet “Prestige”. They are the only student group among all winners from candidates of 22 countries. Before being tapped by CPO, Elsa won a position at the Kalamazoo Sympathy Orchestra (Michigan) and played Principal Clarinet for three years at The Song Opera Company (Ohio) and Richmond Opera Company (Indiana).