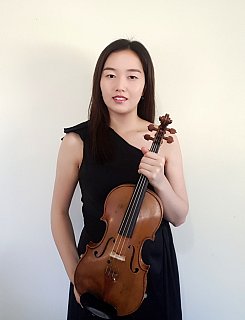 Jiwon is a Korean born New Zealand raised violinist and holds a Master of Music degree from the University of Melbourne and a Bachelor of Music with First Class Honours from the New Zealand School of Music. Principal teachers include Stephen Larsen, Vesa-Matti Leppanen (concertmaster NZSO) and Wilma Smith (ex-concertmaster MSO). Throughout her studies she was a recipient of many scholarships and prizes including solo and chamber music competitions. Since her student days she has been performing extensively as an orchestral violinist and is currently on contract as Tutti Violin with the Auckland Philharmonia Orchestra. She has also played regularly with the New Zealand Symphony Orchestra, Melbourne Symphony Orchestra and the Christchurch Symphony Orchestra among other orchestras in New Zealand and Australia. She also recently spent time in the UK receiving lessons from principal players of the top London orchestras including Royal Philharmonic and London Philharmonic Orchestras. Jiwon has many years of private teaching experience and enjoys helping students achieve their violin and musical goals.